In 2017, the City of Pointe-Claire set up a birdhouse at Edgewater Park, along Lake Saint-Louis, to provide an ideal nesting site for this species in decline.

The first pairs nested there in 2019. This year, seven pairs of adults and 29 chicks are living there.

The purple martin is the largest swallow in North America. The adults measure about 20 centimetres from head to tail, and weigh about 55 grams. They can be recognized by their bluish black shimmering plumage. The males have a dark chest while the females have a pale one.

At the end of the summer, purple martins migrate to South America and return to North America early in the spring to find the best nesting places. They prefer open terrain, especially near bodies of water as they feed on flying insects which they catch in the air.

Purple martins nest in colonies, meaning they prefer to nest close to other pairs and depend entirely on artificial birdhouses with multiple compartments, like the one at Edgewater Park. In Québec, the purple martin population has fallen by more than 90% since the 1970s, in part due to competition from invasive species for the birdhouses, such as the European starling and the house sparrow.

The nests are generally made of mud and twigs, and the inside is commonly lined with tree leaves.

Purple martins reproduce in southern Canada, the United States and northern Mexico. The female lays an average of three to six eggs each summer. After two weeks’ incubation, the eggs hatch and the chicks stay in the nest for four weeks, fed up to 60 times a day by their parents. Adult martins hunt flying insects, including many pest-species, as well as spiders.

Biologists from McGill University are conducting a study of purple martin populations in Pointe-Claire. They placed bands on the chicks’ legs when they were between 12 and 20 days old: a nine-digit government band and a yellow band to easily identify them at a distance. These bands make it possible to gather various data, including location and year of birth, with an eye to improving efforts to protect the population. Banding (also known as ringing) requires training to handle the birds safely and it is not harmful to them. This practice is regulated by the federal government and requires a permit.

An interpretation panel has been set up near the birdhouse in Edgewater Park to tell you more about this species and the important role they play in our ecosystem. 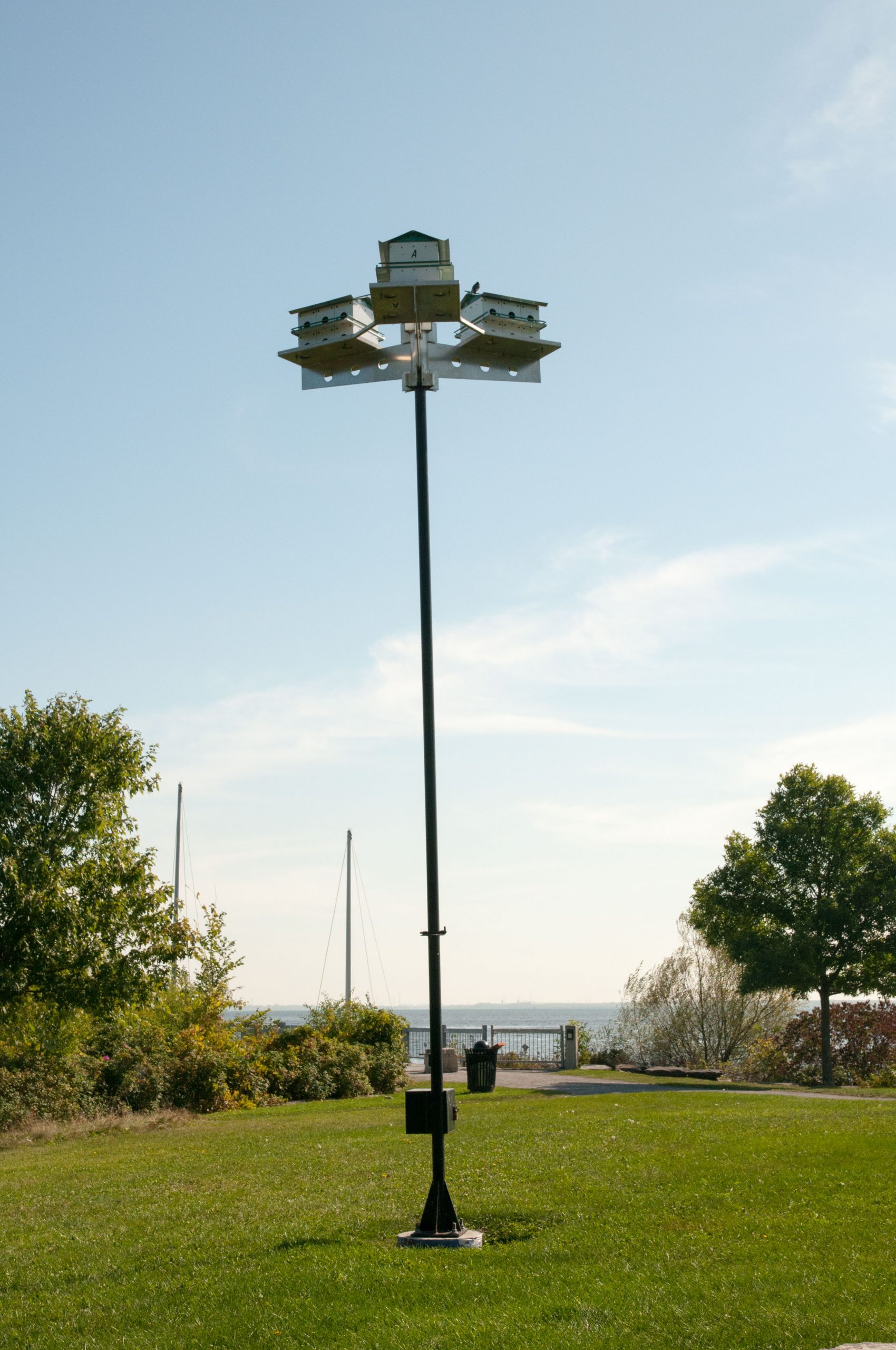 Chicks a few hours after hatching 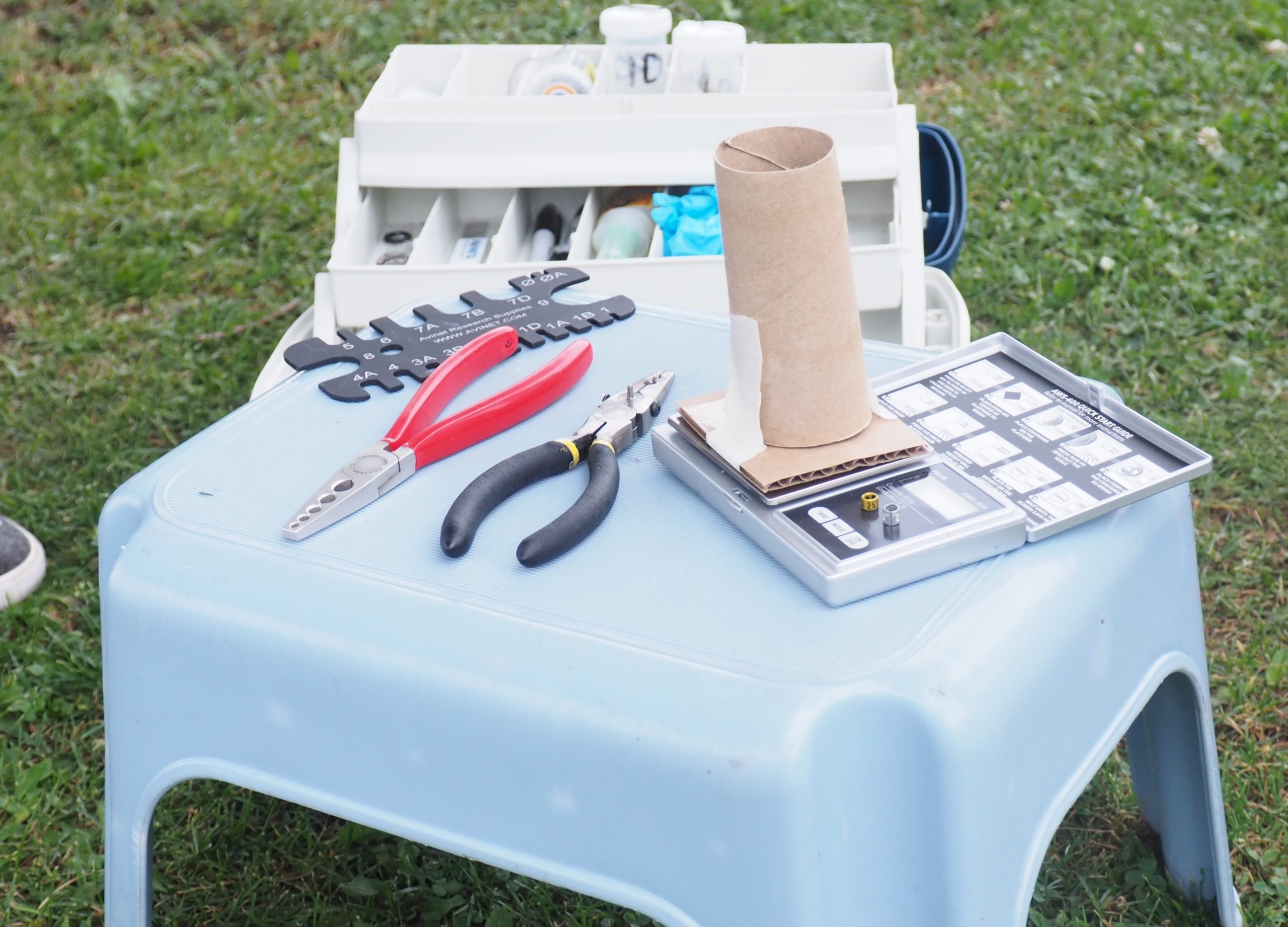 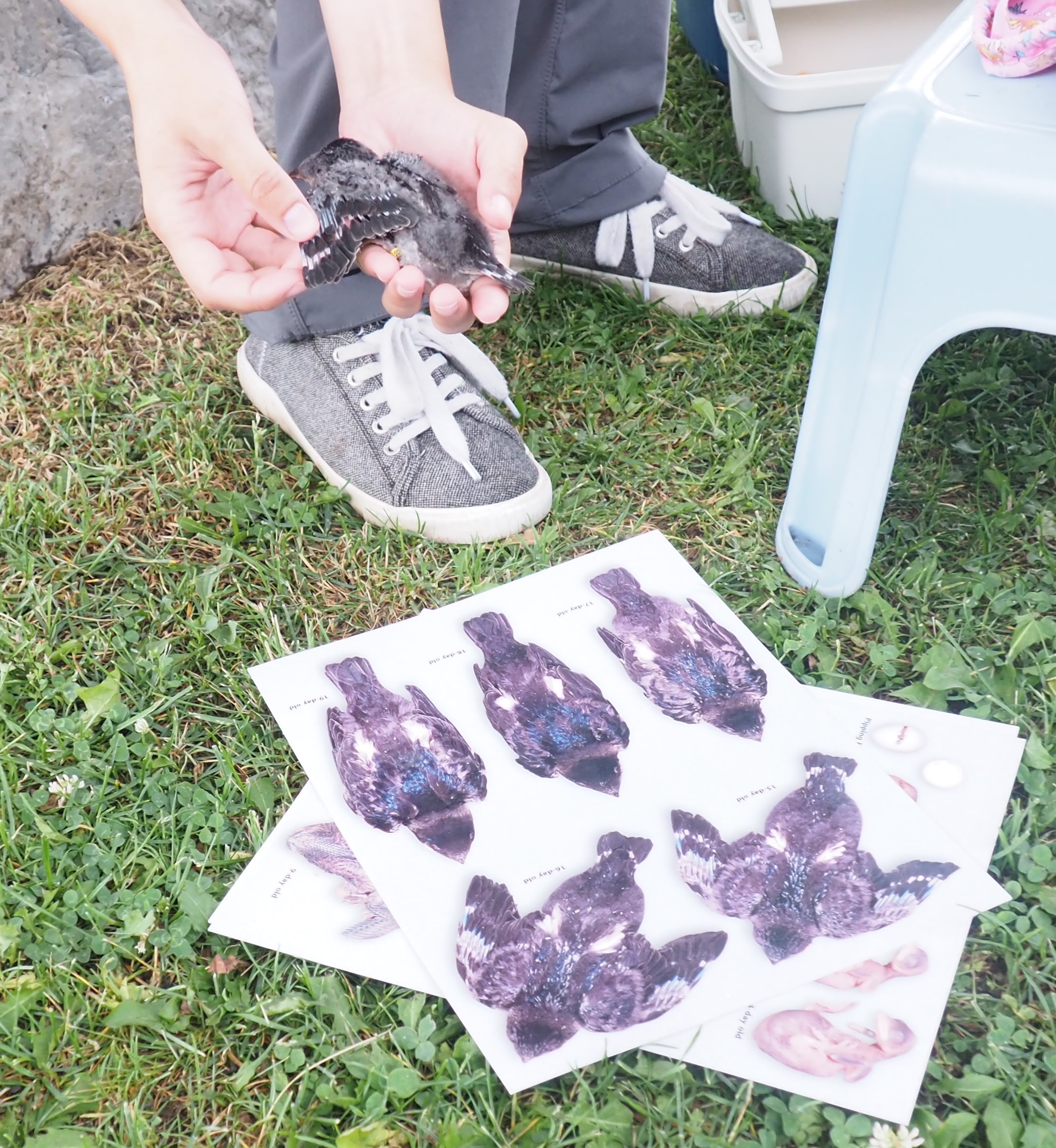 The age and growth of the chicks is determined based on a guide. 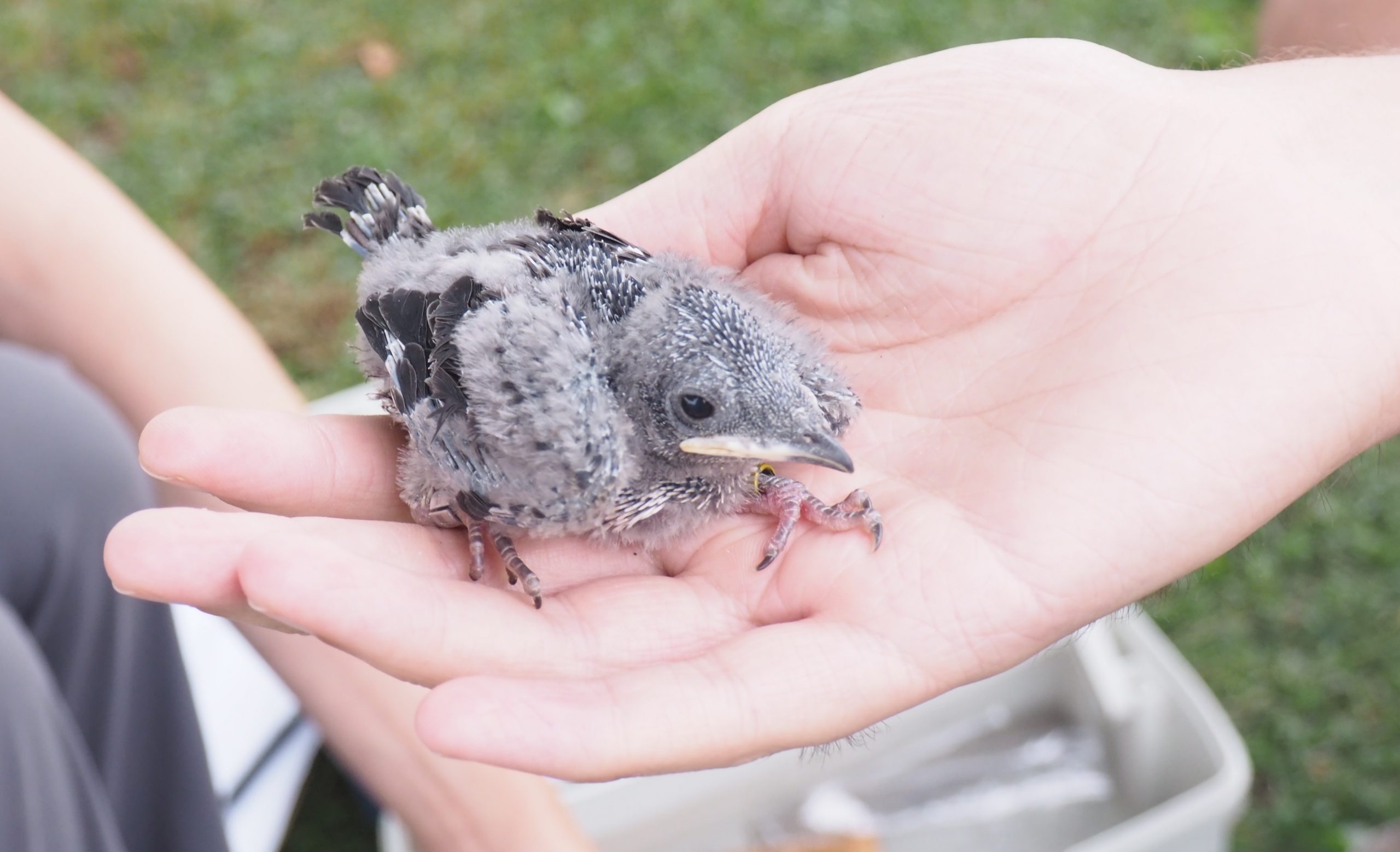 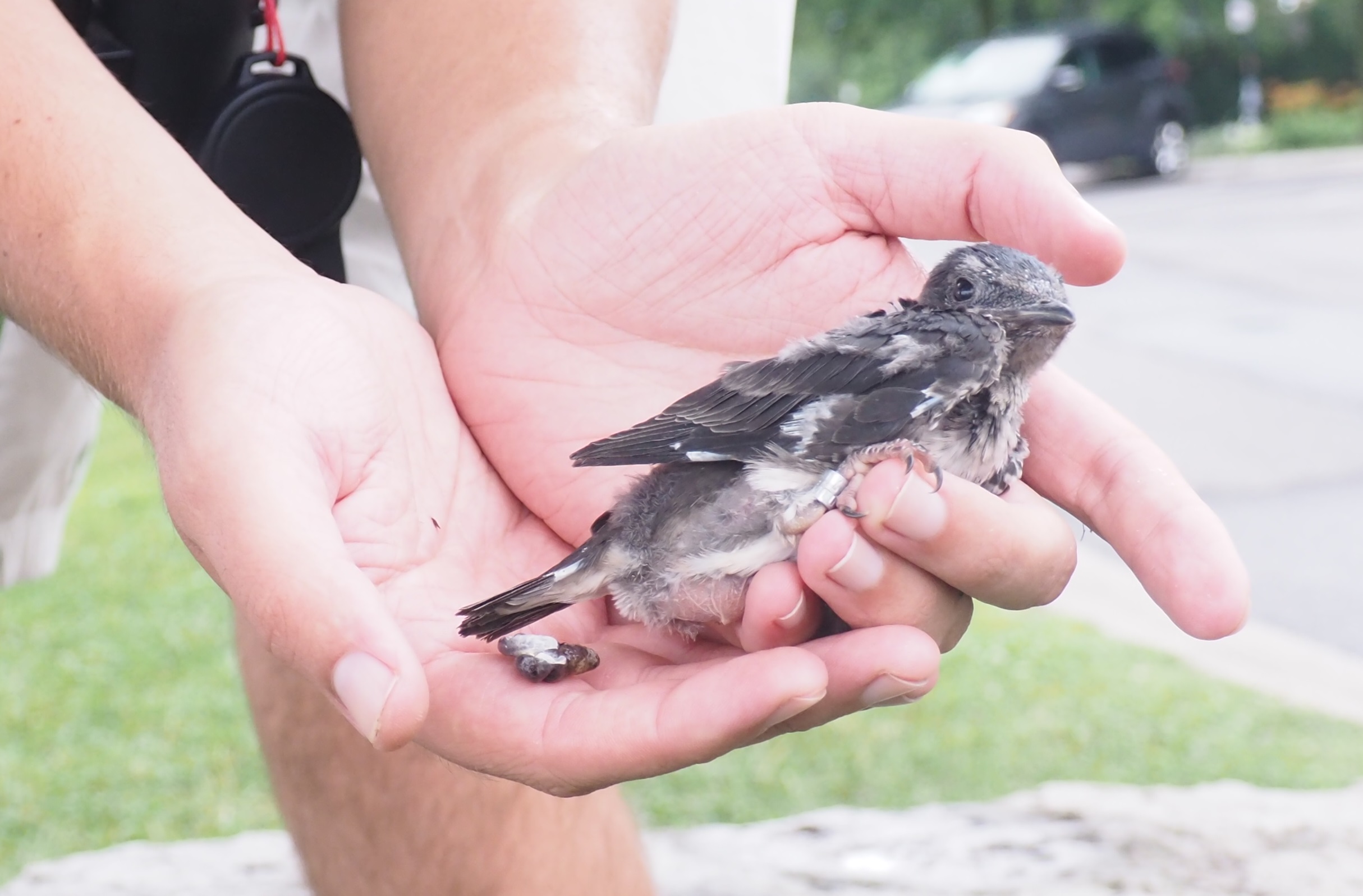