The mayor of the City of Pointe-Claire, John Belvedere, had the pleasure of announcing the results of the Name a Park contest during the City Council meeting yesterday evening. Tony-Proudfoot was selected as the winning name of the future Greenwich neighbourhood park.

“It is an honour and a privilege for us to involve residents in this unique type of collaborative and democratic process. The choice to pay tribute to Tony Proudfoot also shows how appropriate this process was. His social commitment and professional career represent the values of our community and will inspire future generations,” stated Mayor Belvedere.

Born in Winnipeg, Tony Proudfoot moved to Pointe-Claire as a child and graduated from John Rennie High School in 1966. He then played for the Montréal Alouettes and the BC Lions in the Canadian Football League (CFL). He won the Grey Cup with the Alouettes in 1974 and 1977. He was also involved in the community as a journalist, teacher, and coach. After he was diagnosed with amyotrophic lateral sclerosis (ALS) in 2007, he created the Tony Proudfoot Fund to improve the living conditions of people with the disease and provide support for medical research. He died in 2010 at the age of 61.

Over 60 proposals were sent for the contest, which took place from December 2017 to February 2018. The suggestions were evaluated based on the significance of their link to Pointe-Claire and their originality.

Mayor Belvedere had the pleasure of presenting Ms. Proudfoot, Mr. Tony Proudfoot’s widow, with a plaque and gave the two contest winners their prize. Mr. Norm Horner was randomly selected from the 20 participants who suggested the winning name, and Mr. Noah Stevens was chosen at random from among all proposals received.

“Naming the park after Tony Proudfoot is the perfect way to commemorate the life and career of this extraordinary man, as well as his life and involvement in Pointe-Claire, which showed remarkable determination, dedication, and generosity,” said Mayor Belvedere in conclusion.

The development of the park, at the intersection of Gendron and Des Frênes Avenues, is planned for 2019. It will include playgrounds, rest areas, a hiking trail, and a natural space. 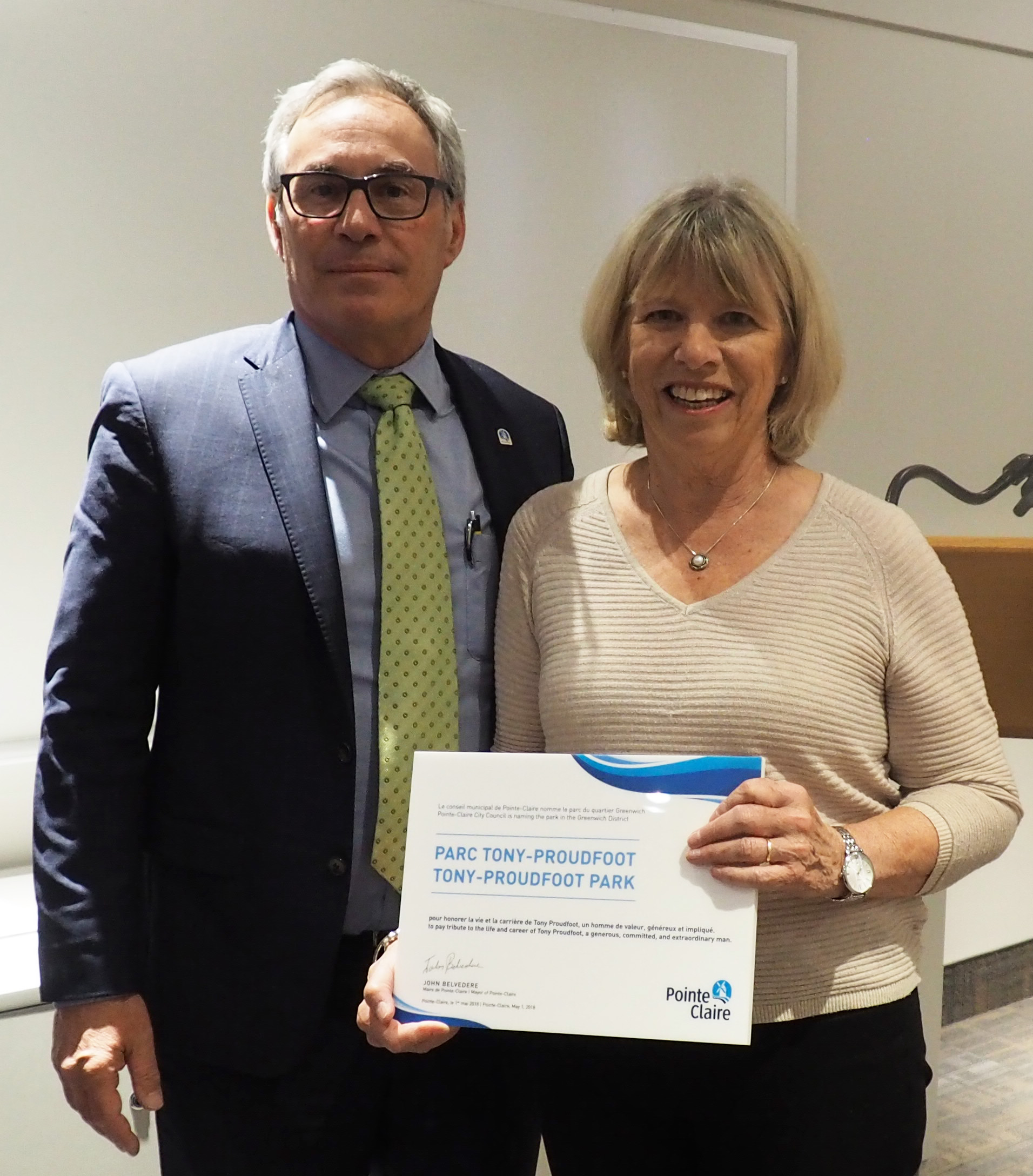