In 2017, the City of Pointe-Claire set up a nest box in Edgewater Park to provide an ideal nesting site for this species in decline. Since then, a consultant ornithologist has been closely monitoring the situation to assess the species’ population growth on the territory.

The purple martin population is in serious decline, having dropped by almost 94% between 1970 and 2015. Consequently, the arrival of the first pairs in the Pointe-Claire nest box in 2019 was greeted with great enthusiasm. We also observed a first brood the very first year the birds made their home in the nest box.

Each year since then we have seen an increase in the purple martin colony roosting in the large nest box. In 2019, five pairs of purple martins hatched 17 chicks; in 2020, eight pair hatched 29 chicks; and in 2021, 12 pairs hatched 47 chicks. These are very impressive numbers and a remarkable development for this colony that chose Pointe-Claire as its nesting site!

In early April, the pairs return from South America. In May and June, purple martins are busy building their nests with twigs, algae and mud. Right before egg-laying, they line the nest with fresh green leaves on which they lay their eggs. Both the male and female sit on the eggs for a period of 15 to 16 days before they hatch. The chicks remain in the nest for 28 days before their first flight. At the end of August or beginning of September, the colony migrates back to the South for the winter, primarily to the Amazon tropical forest. 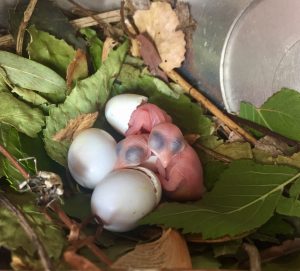 The City has set up three nest boxes on the shores of Lake Saint-Louis. With their multiple compartments, these nest boxes are ideal for purple martins because these birds like to live in groups. The nest box in Edgewater Park can accommodate up to 45 pairs of purple martins. These birds depend entirely on this type of artificial nest box that allows them to nest close to each other. Since these birds prefer exposed land close to bodies of water, the shores of Lake Saint-Louis are ideal for setting up nest boxes and studying the species. 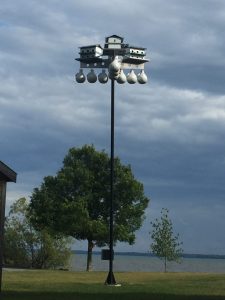 Every year, the ornithologist maintains the nest boxes and places bands on the chicks’ legs to better observe the evolution of the colony and to determine if the young also choose Pointe-Claire as their nesting site.

Two bands are placed on the chicks when they are between 12 and 20 days old: a nine-digit government band, and a yellow band to make it easier to identify them from a distance. These bands make it possible to gather a range of data, including the bird’s location and year of birth, with the goal of improving efforts to protect the population. Banding requires training to handle the birds safely and does not harm them. This practice is regulated by the federal government and requires a permit. 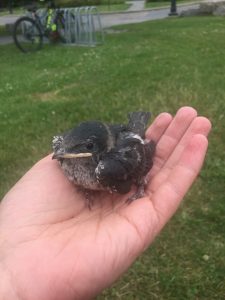 The purple martin is the largest swallow in North America. The adult measures approximately 20 centimetres from head to tail and weighs close to 55 grams. It can be identified by its shimmering bluish-black plumage. The males have a dark chest and the females have a pale chest.

If you visit the site, there is an interpretation panel located close to the nest box in Edgewater Park where you can learn more about this species and the important role it plays in biodiversity.

Other columns on the purple martin