The Pointe-Claire Volunteer Rescue Unit (PCVRU) is a volunteer organization of professionals that serve the community. They can respond to emergency situations and incidents threatening public health and safety.

The team comprises over 30 members with various roles:

The Unit can respond to a range of situations by providing various emergency services:

Fields marked with an asterisk (*) are required. 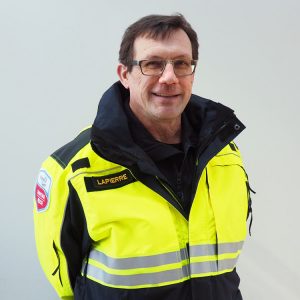 Comprised of men and women from various backgrounds with a range of skills, the Unit is a strong, versatile team that can handle any situation. We invite you to discover these people, their areas of expertise and their reasons for being involved in the community!

James Lapierre has always been involved in his community. His first involvement was in sports, both professionally and as a volunteer. He played an active role with his children’s sports teams so that he could spend time with them, share their passion and pleasure and build positive relationships with them. During his career, he worked in the aquatic sector for the City of Dollard-des-Ormeaux and as a sports coordinator and sports director for the Special Olympics, where he developed expertise in this area and among people with intellectual disabilities.

In 1990, Mr. Lapierre moved to Pointe-Claire and, the same year, read about the Volunteer Rescue Unit in a newspaper. He and his wife decided to get involved. He has been a member of the Unit ever since, filling almost every role: medical officer, captain, training officer, reservist and is a former director of the Rescue Unit.

When he joined the Unit, he already had extensive lifesaving and first-aid knowledge and techniques under his belt, which he had acquired on the job. In fact, it was this knowledge that made him a good candidate for the organization. For the other areas of expertise required to be a member, the Volunteer Rescue Unit provides training and support so that all of its members can respond to various situations.

Over the last 10 years, James Lapierre transitioned from an active member to a reservist, which meant that he could lend a hand when needed, during major events, but was no longer present on a weekly basis. This allowed him to get involved in other ways and with other groups in the West Island. However, with the onset of the pandemic in 2020, he realized he missed the organization and its camaraderie and felt a need to renew his involvement with the community. He resumed his active membership that summer.

Presently responsible for training, Mr. Lapierre coordinates the training plan for members, making sure that the content covers all subjects and that members acquire the expertise needed to respond to a variety of situations. The training is extensive, including medical knowhow, detailed knowledge of the territory, search and rescue, how to use the various tools available, and more.

“While the technology has changed over the past 30 years, knowhow and troubleshooting are still the basis of how we operate,” said Mr. Lapierre, who has seen times change. He says that while some things have changed, others have remained the same! In the past, and still today, people are there to help and get involved. “People need to know how to look at a problem and find a solution, the basic elements don’t change. Yes, we now have Google Maps on our smart phones, but if your phone battery dies, you need to know how to read a map!” he said.

Asked to summarize the Volunteer Rescue Unit in his own words, he said that the organization is there “for problems big and small.” Through its actions, the PCVRU makes a difference in people’s lives and supports them when they are in a difficult situation. Some situations do not require 911 or the Red Cross—that’s when the Unit steps in!

“When I became a member of the PCVRU, I was expecting to put my first-aid and search-and-rescue knowledge to work, to help people in specific situations, like floods. I wasn’t expecting to search for someone who’s gone missing, to mobilize the team, to go out into the field, and to be present for the family,” said James Lapierre. “Our greatest strength is being there for people!”