Tax bills are sent out at the beginning of every year: the tax payment deadlines are in February and May.

Don’t forget to change your preferences to receive communications in English.

Registration to the electronic document service

You can also subscribe to the electronic document service, you will be notified by email when a new document is available in your account. When you register for this service, you no longer receive paper invoices.

Registration is done directly on the Voilà! platform. 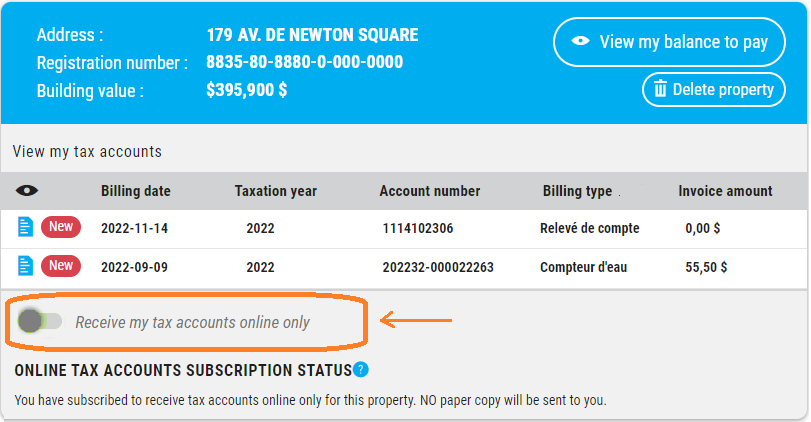 To register for online services :

Once you have completed the registration, you will receive an email confirming your registration.

To view the taxation roll or the property tax bills for an address, click here.

For professional access, the cost per consultation is $50 (plus taxes). Please note that future consultations for the same property will be free of charge until 30 days following the first consultation.

Based on size of meter in inches

There are a number of ways available to pay your municipal tax bill, transfer tax bill or water tax bill.

This is a simple, effective way to meet the deadlines and avoid late fees.

When you sign up for the pre-authorized payment plan, each payment is taken right from your bank account. If you remain the owner and your banking information does not change, renewing is not required. However, you must inform the City of any changes, including the sale of your property.

*Monthly payments enable you to spread your payments out over 12 months from February to January of the following year. However, interest and penalty charges are calculated on balances due after the two legal deadlines.

To register for one of the pre-authorized payment plans:

How to cancel the registration

Download the required form or pick one up at the City Hall tax counter at 451 Saint-Jean Blvd. Then send it to the following address:

Your request will be processed within ten business days after the form is received.

How to modify the registration

Your request will be processed within ten business days after the form is received.

All municipalities are required to collect a transfer tax whenever a property within their territory is transferred. (Act respecting duties on transfers of immovables, CQLR c. D-15-1)

The property transfer tax is charged when a property is purchased; it is payable in a single instalment.

When a property is transferred, the City of Pointe-Claire does not automatically re-issue property tax bills. It is the new owner’s responsibility to ensure that the municipal taxes due are paid.

The basis of imposition is the greatest of the following three amounts:

The following are generally regarded as considerations:

If the imposition is done on the basis of the market value at the time of the transfer, the value entered on the property assessment role must be multiplied by the comparison factor of the transfer’s fiscal year.

The comparison factors of the City of Pointe-Claire for the following fiscal years are:

Calculation of the tax on transfers of immovables

The tax is calculated as follows:

Here is a sample calculation using $660,000 as a basis of imposition:

Amendments to the Act respecting duties on transfers of immovables

On March 18, 2016, the day after the speech on the 2016-2017 Budget by the provincial Minister of Finance, various legislative amendments to the Act respecting duties on transfers of immovables concerning the following aspects came into effect:

For more information on these amendments, we encourage you to read the 2016-2017 Budget by visiting the following website: budget.finances.gouv.qc.ca/index_en.asp.

Taxpayers who are required to disclose share transfers or transfers of immovables can contact us at the following email address: taxes@pointe-claire.ca.

A buyer may be exempt from paying the duties on a transfer in certain cases as set out in the Act respecting duties on transfers of immovables CQLR, c. D-15.1. The notary must enter a statement in the deed of sale (or instrument of transfer) so that the buyer receives the exemption from the transfer duty as per the cases provided for in the legislation.

Note that, since March 18, 2016, common-law spouses separated by reason of the breakdown of their union have 12 months from the date of separation to complete the transfer, otherwise the exemption will not be applied. Married couples have 31 days after the divorce judgment to complete the transfer if the divorce judgement does not award one of the spouses ownership of the immovable.

Several other situations justifying exemption are provided for by the Act.

Special duties are a form of compensation in lieu of transfer duties that are billed to buyers whose transaction is exempted.

The Act respecting duties on transfers of immovables – CQLR c. D-15.1 sets the amount of the special duties based on the transferred values:

The property assessment roll will be in force for the years 2023 to 2025 inclusive. Unless your property has undergone significant structural changes, its value will remain unchanged during this period.

The City of Montréal’s Direction de l’évaluation foncière is responsible for the property assessment roll. The value of your property is equivalent to its most likely selling price in a free and competitive market.

Procedure – Application for review of the property assessment roll

Form – Application for review of the property assessment roll

Please note that due to the present health situation due to the COVID-19 pandemic and under Ministerial Order 2021-009 issued on February 25, 2021, the public is not permitted to attend the public auction in person. Persons wishing to participate in the public auction (by videoconference) are invited to register by completing the form that is also available at City Hall at the taxation counter. The duly completed form and the required deposit must be received at the City’s Finance Department located at 451 Saint-Jean Boulevard in Pointe-Claire no later than June 11, 2021. Subsequently, an email including the necessary information will be sent to the participants.