As autumn settles in with its cooler temperatures, maybe you’ve noticed the increased presence of certain insects, including the boxelder bug.

The boxelder bug, commonly known as the maple bug, is mainly found on boxelder maples, from which it sucks sap. It can also attack other maples, as well as ash trees and fruit trees, such as cherry, plum, peach and apple trees.

On sunny summer days, boxelder bug swarms can be seen around homes, mainly on the south side. When winter comes, they look for heat and food by hiding in woodpiles, garages and sheds and even in homes through breaches around the foundations, open air intakes or doors and windows without screens.

Is the boxelder bug dangerous?

The boxelder bug isn’t dangerous, but it can be considered a pest due to its numerous swarms. However, it can be harmful to trees, spotting their leaves and potentially damaging their fruit.

When crushed, the boxelder bug releases a foul odour. The insect and its excrement can stain structures, drapes, furniture and sheets. Its carcass can also attract carpet beetles.

How to avoid an infestation 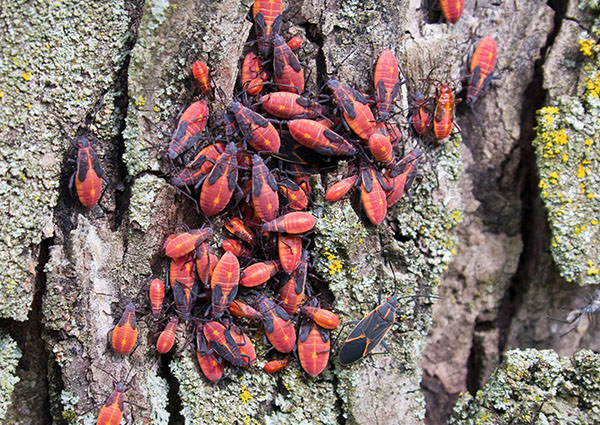